Poulsbo - At 55 years old, Patrick Momany is the first to admit he isn’t the ideal picture of health.

So why would the Kingston restaurant owner — who
jokes he’s overweight, diabetic and hasn’t done much to prepare
physically — choose to walk 60 miles from Poulsbo to Fort Lewis?

In Kingston, BBQ by the Sea with a Texas Twang

Wearing a brimmed hat, dark sunglasses and a long
beard, the man sits in a rocking chair, eyeing two visitors as they
approach.

“There’s a rising fee,” he growls.

“I charge a rising fee if I have to get up,” he says, then cracks a broad smile. “What can I get for you?”

SMOKED GOODNESS
Lunch on Saturday was a no-brainer. We headed for the wonderfully incongruous TaTu BBQ (11133
NE Maine Ave., at Hwy. 104), a Texas-style barbecue shack just beyond
the main commercial strip. Owner Pat Momany, a colorful Missouri
native, smokes his meat behind the building in a large home-built
oven, layering different types of fruitwood for a complex, rich taste.
He also makes and sells rubs and Carolina-style sauces rarely seen in
the Northwest, including a mayonnaise-based concoction and a tangy
vinegar-based mustard sauce. We parked ourselves at one of two outdoor
picnics tables and tried the pork ($6.99) and brisket ($8.50)
sandwiches, each of them a heaping half-pound pile of meat served on a
sesame bun with coleslaw and a pickle. 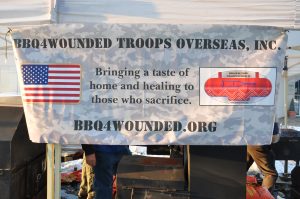 Your Support Makes It ALL Happen

THANK YOU FOR YOUR CONTINUED SUPPORT!

We currently are working on reestablishing our 501 (c) 3 status. Until that is done please Donate to these organizations that have supported BBQ4Wounded Troops Overseas in the past:   Online Store: Tatu BBQ Online Store Visit our parent online store and buy cool stuff like t-shirts, mugs, posters, and more! All proceeds help support our mission. 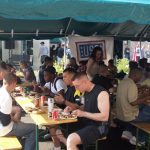